We called this plant the bread of the jungle! In almost every garden we passed through on our trip down the Rio Negro Manihot esculenta (Tapioca, Cassava) was grown. It is an unusual looking upright perennial woody shrub with tuberous roots that reaches 20 feet in the tropics but is typically 8 to 12 feet tall here in California. It has attractively dissected palmately compound dark green leaves on long reddish petioles that can be as large as 1 foot wide, It has terminal clusters of pale green to yellow-brown non showy flowers in summer which are followed by green round seed pods that open explosively when ripe! This plant thrives in part sun to light shade but will tolerate full sun along coastal sun in a any soil (tolerates poor soils) and irrigate only occasionally to very little. It is a drought tolerant Although considered root hardy to USDA Zone 8 (10 F) it will freeze down the stems to the ground as temperatures drop much below 25 F and usually is deciduous in winter, dying back to the main woody stems – can be back to the harder wood in late fall or early winter to keep the plant looking neat. If cultivating this plant for tubers it requires at least 8 frost free months. Though this plant originated in Brazil and Paraguay it has long been cultivated in many pan-tropical locations for its enlarged starch-filled roots. These are prepared much like potato though they must be cooked to eliminate toxic concentrations of cyanogenic glucosides. Other common names for this plant are Cassava, Mandioc, Mandioca, Manihot, Manioc, Yuca. 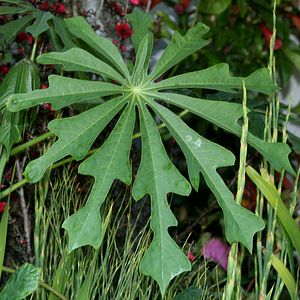