We were hopelessly lost in Wollemi National Park in New South Wales, Australia. We were low on water and food and could not find the cache that we had stowed two days before. Half our group was ready to mutiny and turn back without seeing the famed “Wollemi Pine” in its natural environment and the other half insisted on persevering. The debate was turning acrimonious when we came around a bend and in the sweltering heat, saw a stand of 130’ tall Wollemia nobilis flanked by a beautiful waterfall! They were simply magnificent and everyone was awestruck. Our collective mood shifted to reflective. Here were the trees, only a few dozen in number that had survived since the time of the dinosaurs, (approximately thirty million years!). We sat in the shade under the majestic trees and shared our last water and biscuits.

These exceptionally rare trees are 4’ tall and sold in 15gal pots, $225.00. Shop around! Largest Specimens for sale on internet! 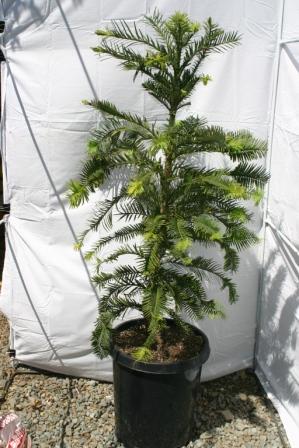