Pseudopanax ferox, also known as Fierce Lancewood is a small slow growing tree-like plant that can reach 18 feet at maturity in 10 to 15 years. At maturity the plant has a rounded crown of shorter and wider leaves atop a straight longitudinally grooved slightly twisted and sinewy trunk but it is the juvenile plants that are most interesting. The juvenile leaves, which this plant holds until maturity, are very narrow and over 1 foot long of a gray-green color with a metallic sheen. In addition they have an attractive prominent reddish midrib and large blunt teeth along the margins. The leaves are produced all around the upright developing single trunk and hang downwards starting with the newest leaves held at about a 45 degree angle with older leaves, which often go right down to the base of the plant, held nearly flat against the stem. The insignificant small green flowers appear only once plants mature and are in terminal compound umbels. Plant in part day to full coastal sun in a very well drained soil and water occasionally to regularly. Plants will grow in full shade but very slowly and have fewer leaves. Hardy to 15-20° F with light frost damage inducing branching. The dimorphic changes between a smaller juvenile and the mature plant is common in New Zealand plants and is thought to be a defense mechanism to prevent animals (perhaps even the legendary Moa, a large flightless and now extinct bird) from browsing a young tree. Pseudopanax is a genus of about 22 trees and shrubs found in New Zealand, Tasmania, New Caledonia, China and Chile. There are 14 species endemic to New Zealand of which Pseudopanax ferox is one of the rarer. It can be found in scattered groups in lowland forest from Mangonui in the north island to Otago on the south island. We offer this rare plant in one gallon containers while supplies last. 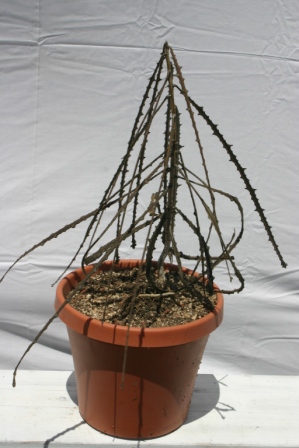