Leonotis leonurus (Lion's Tail) this plant is used in Africa by Shamans as it is known for its medicinal and mild psychoactive properties. The main psychoactive component of 'Leonotis leonurus is leonurine. The plant is a broadleaf evergreen large shrub native to South Africa and southern Africa, where it is very common. It is also one of our favorite all round plants for the garden. It is an erect evergreen shrub to 4 to 6 or more feet tall by nearly as wide with a branching woody base that produces many erect herbaceous stems bearing dark green 4 to 6 inch long narrow lanceolate leaves with softly serrated margins. From late spring through fall appear the fuzzy orange curved tubular flowers in whorls at spaced intervals around the top half of the long upright stems with new buds produced near the branch tips. This should be planted in full sun in a well-drained soil and is drought tolerant but looks best with regular irrigation. It can survive temperatures down to 20 degrees F and if it freezes back in the winter it will often re-sprout with new growth from hardened wood. For this reason it can be treated as a perennial and has been known to grow in the south of England. In cold location plants should be mulched well to protect the wood crown. It responds well to pruning, remaining more dense and smaller and should be pruned yearly after flowering. The flowers are good in arrangements (stem bottom should be burned) and it is known to attract birds, bees and butterflies to the garden. Though southern California gardeners have long called this plant Lion's Tail it is also known by some as Lion's Ear, Lion's Claw and Minaret Flower. The name Lion's Ear is a translation of the name given to the genus from the Greek words 'leon' meaning "lion" and 'otis' meaning "ear" in reference to the resemblance of the flower to a lion's ear. The specific epithet leonurus means "lion colored". It is also known as Wild Dagga (a name also used for the unrelated Cannabis sativa) because of its traditional medical uses in South Africa, where it is found growing naturally among rocks in the grasslands of the Cape district and the Transvaal. Leonotis leonurus, also known as Lion's Tail and Wild Dagga, is a plant species in the Lamiaceae (mint) family. 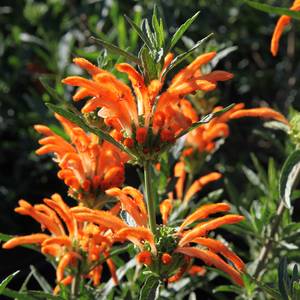