Aloe plicatilis (Fan Aloe) Is an interesting succulent shrub with gray colored stems that terminate with a fan-like cluster arrangement of flat 12 inch long slightly upcurved blue-gray round-tipped leaves. Old plants are typically 3-6 feet tall but others in cultivation have been noted to 8 feet tall by 6 feet wide and plants from the wilds of the high winter rainfall areas of western Cape Mountains of South Africa are reportedly as tall as 15 feet. Each leaf cluster bears one erect 12 to 20 inch tall un-branched inflorescence bearing an open terminal cluster of tubular orange-red flowers in late winter to early spring. This Aloe takes full coastal sun, but not the hottest afternoon sun in inland, super hot locations. It also benefits from occasional watering during summer months and needs winter and spring irrigation if grown where it does not receive adequate water from rainfall. It is hardy to about 23 degrees F. Old leaves drop cleanly away to exposed the attractive smooth trunk. This plant was described in 1695 by Heinrich Bernhard Oldenland but the first valid Latin name applied to this plant by Linnaeus in 1753, was as a variety of Aloe disticha (var. plicatilis), a species synonymous with Aloe maculata. To correct this the plant was renamed by Philip Miller in 1768 using Linnaeus' varietal name for its specific one - this name from the Latin word ' plicatilis' meaning "foldable" is in reference the fan-shaped rosettes. In an interesting twist of nomenclature a recent article in the Journal >i>Phytotaxa 76 (1): 7–14 (2013), titled "A revised generic classification for Aloe (Xanthorrhoeaceae subfam. Asphodeloideae)" proposes that this plant actually be taken out of the genus aloe and given the name Kumara disticha, a name that was used to described it by the German botanist Friedrich Kasimir Medikus in 1786. Other major name changes proposed in this article include that all of the tree aloes (Aloe barberae, A. dichotoma, A. eminens, A. pillansii, A. ramosissima and A. tongaensis ) be placed in the genus Aloidendron and the scrambling aloes (A. ciliaris, A. commixta, A. gracilis, A. juddii, A. striatula and A. tenuior) be put in the genus Aloiampelos. Until such time as this name change gets wider recognition we continue to call this plant by its original name. We sell this remarkable plant in 2 gallon containers. 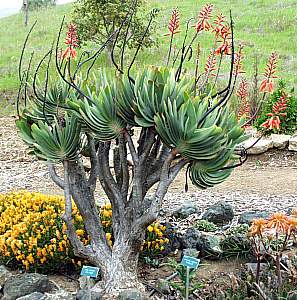