Against our better judgment we relented and allowed one of our group to bring his new girlfriend along on our trip to Madagascar’s famed thorn forest. We regretted it as soon as we were on the plane! She complained about everything, was condescending to our Malagasy guide, compared everything to New York City, and was completely ruining the trip. By the third day we were having fantasies that involved rope, duct tape and leaving her by the side of the trail to be eaten by ants! We were hiking along a trail and she was ahead of us bitching about the heat, bugs, and anything else that came to her little mind when she slipped on loose gravel. She reached out for the first branch nearby to catch her fall and grabbed a branch of Alluaudia procera which was covered with 3” sharp thorns! She let out a shriek and recoiled directly across the pathway into another sharp spiny bush and again, shrieked as she bounced from that bush into a third! After that she collapsed into a sobbing heap in the middle of the trail repeating “I want to go home, I want to go home” between sobs. We looked at each other and just exploded with laughter!   We couldn’t help it! Every time the laughter subsided we looked at each other and erupted once more.  If she wasn’t such a pain in the ass it probably wouldn’t have been so hilarious.  But it was! We decided right then that that Alluaudia was special and we had to collect cuttings! This plant is a must have for any collector. It will grow to 45’ in its natural environment but will grow to 25’ in cultivation. It is quite cold hardy and a wonderful conversation piece!  Plants sold in quart containers. $29.99 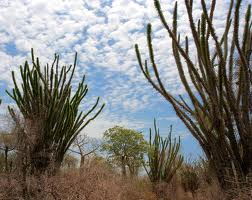