We collected this stunning plant on our trip through South Africa. It is absolutely one of the most beautiful of all the Aloes. Aloe variegata, also known as Tiger Aloe and Partridge-breasted Aloe is a much sought after species of aloe indigenous to South Africa and Namibia. This little jewel is a smaller aloe growing to 10 to 12 inches tall by 9 inches wide and forms rosettes, sometimes solitary but often clustered, with leaves arranged in 3 ranks that are upright with a boat hull shape (lanceolata-deltoid) that have a distinct gutter down the middle.

The white spots on upper and lower surfaces of each leaf often line up in horizontal bands, giving this plant the common name of Tiger Aloe. The spots are also said to resemble those on a partridge breast, which gives this plant its most used common name. This plant grows exceptionally well as a houseplant and is a must for any plant collector. We sell well sized plants in quart containers. 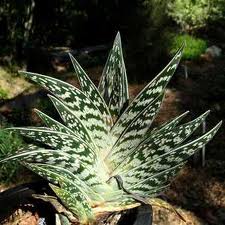