We were in the Kalahari, tracking a wounded Kudu antelope with our San guides. Technically, hunting was discouraged by the government so we were trying to be as discreet as possible while tracking a huge wounded antelope! It had been hit by a poisoned arrow made from an extract of the Boophone plant which is one of the coolest, weirdest, most beautiful bulbs in the world. After several hours of walking and constantly checking the apparently obvious signs in the bush (we could see nothing!) our party came upon the dead Kudu. The men quickly sliced open the beast and pulled out its liver! We were offered some and we politely declined. We were able to see how they made the poison from the Boophone bulb. Boophone disticha A large deciduous bulb from a wide range in South Africa from the drier southwest to the more tropical East. The bulb can grow to about 7 inches in diameter with a thick covering of dry scales above the ground and blunt gray leaves that can reach to 20 inches tall and have wavy undulating edges. The inflorescence, which can appear on older plants in late winter or spring and often when the plant is leafless, are composed of an umbel of many pink to red funnel shaped flowers. It is one of the most interesting bulbs and a real conversation piece! We collected this amazing plant and are able to offer bulbs grown in one gallon pots. 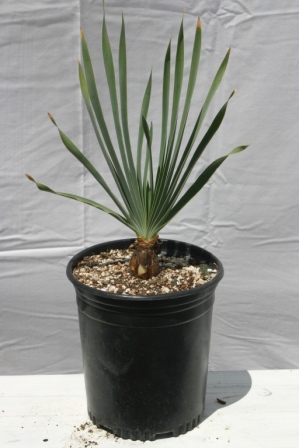