The explosion was so powerful we could feel it pass through our feet and out through our bodies in a low rumbling wave! We were in the Parque Nacional Volcan Masaya in western Nicaragua and we were lucky enough to witness Mt. Masaya vent her fury! The volcano was definitely active this day and as we were hiking through the jungle thick flumes of sulfuric smoke wafted across the trail. We hastily descended away from the crater and lower down the trail. As we exited the path at the Visitors Center we saw our car had been hit by rocks hurled in the explosion! We were grateful that it was a rental and debated if we could still drive it.  As we waited for the car rental representative to bring out a new car we used our time as any plant geek would and started to look around. In a large clump running up a slope was the most beautiful Salvia we had ever seen. It was covered with enormous flowers!  This bush was relatively large at about 2 meters by 2 meters and absolutely covered with enormous 12” long pink fuzzy flowers. Salvia wagneriana is a perennial found in Nicaragua, Costa Rica, Guatemala, El Salvador, and the Mexican state of Chiapas, and grows in warm, moist areas. This Salvia has the largest of the fuzzy magenta flowers on any Salvia sometimes measuring up to 12” long! Sold in quart containers $19.99 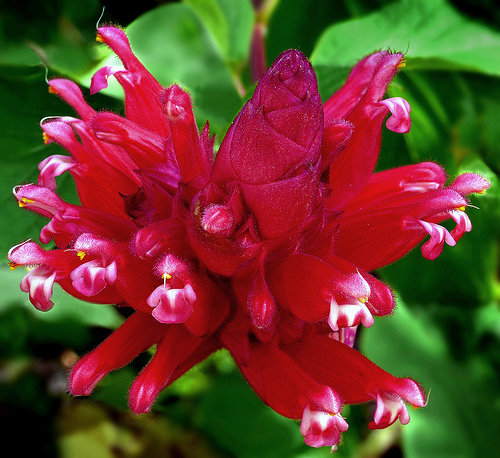