A true California native, Giant Sequoias are restricted to several isolated groves located between 5,000 and 7,000 feet in elevation along the western slope of the Sierra Nevada Mountains. Measured in volume, Giant Sequoias are by far, the largest trees in the world. They are not only the largest trees alive today they are the largest living organisms on the planet! A specimen known as General Sherman weighs a staggering 2.7 million pounds, standing 275 feet tall from its base which is more than 100 feet wide! Giant sequoias require the periodic dry heat of the mountains in order for their cones to open and release seeds. Still reaching impressive heights of up to 311 feet, giant sequoias are typically shorter than their coastal relations. What they lack in height, however, they make up for in size, usually outweighing giant redwoods substantially. We sell these remarkable trees in 1 gallon containers. 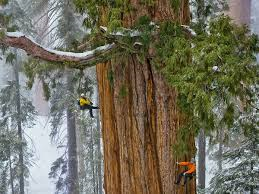