Akebia quinata, commonly known as the Chocolate Vine is endemic to Japan, Korea and Western China. This stunningly beautiful, cold tolerant vine is a fast growing, woody semi-deciduous (in mild winter regions), twining vine that can climb to 30 feet in its native habitat but seldom reaches that in cultivation. The Chocolate Vine is root hardy to around -20° F and is a useful as an exotic deciduous vine in USDA zones 5 to 6 and semi-deciduous to evergreen in warmer zones. The palmately compound leaves are composed of five rounded 2 to 3 inch long leaflets that emerge a gorgeous purple tinged then age to a an incredible blue green. In late winter to mid spring clusters of rounded, whitish buds form that open to expose an interestingly complex, unusual, and fragrant purplish-brown flowers with 3 petals. They are unlike any other flower and are a real conversation piece. Male and female flowers form separately on the inflorescence with staminate flowers near the terminal end and with female flowers below. Flowers that are pollinated develop into a crazy, sausage-shaped fruit. Upon ripening, the fruit slits along one side longitudinally to expose the edible sweetish pulp surrounding the seeds. Plant in full sun or part shade, but it should have a semi-rich, well-draining soil with regular to occasional irrigation and it does best with soils that have even moisture. We offer this unusual vine in one gallon containers while supplies last. 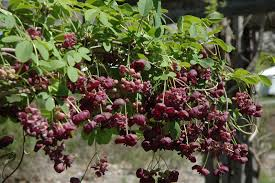