The air holds little warmth at an altitude of 7,000 feet. We entered under the canopy of dense forest and it suddenly became freezing! We were trekking with “Senor Pedro”, our guide, who you might say was a bit of a free spirit. His purple mustache should have been a warning! He had agreed to take us up to several lesser known temples around Machu Picchu, high in the Andes. We were also on the lookout for many of the amazing endemic plants that grow in this region. We stopped for lunch and Senor Pedro broke out some beer to go with the lunch he had packed. We asked what kind of beer it was because it tasted like monkey piss! It was, he replied, chicha beer. He said it was a special indigenous beverage and that “he was sure we would grow to like it”. We couldn’t say no to that so we finished the drinks with our lunch. What Pedro forgot to mention was that chicha beer contains the seeds from the Brugmansia sanguinea plant which is highly physcotropic! After lunch we started off up the trail again and after about a mile of climbing started feeling rather odd! When we finally got to the point that we could look at each other without breaking out in hysterics we had reached our camping place for the night. All around us were beautiful plants and an exceptionally robust specimen of Brugmansia sanguinea. We collected seeds from this monster and offer its offspring to directly you. All Brugmansia species, sanguinea included, are poisonous to ingest! These plants are sold in quart containers 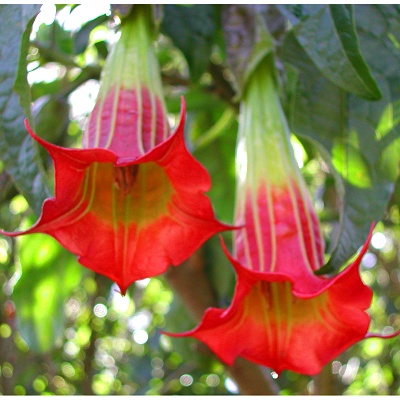