Agave bracteosa 'Monterrey Frost' (Frosted Candelabrum Agave) is an incredibly rare variegated form of the Octopus Agave (Agave bracteosa) which grows to 1 foot tall by a foot and a half wide. This Agave has supple unarmed arching narrow leaves that are pale green edged with a creamy-white margin. Once the plant matures it erupts with a 4 to 5 foot tall dense spike bearing small pale yellow to cream flowers with exerted stamens and pistils. This rare Agave should be planted in bright shade to part sun. It may take full sun along the coast. Water occasionally and protect from temperatures below 20 F. Agave bracteosa is native to northeastern Mexico, where it occurs in steep rocky areas and on cliffs in the mountains near Monterrey, Nuevo Leon and Saltillo, Coahuila. This cultivar has reportedly been passed along in California collectors' circles for more than a decade, but is rarely available to the general public. This is truly an incredibly rare Agave and a must have for any rare plant collector. Sold in quart containers. 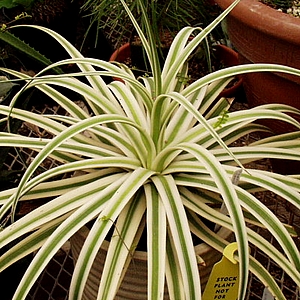