One of the best bonsai subjects around, Ficus palmeri is endemic to Baja California and quickly makes a swollen, fat, white trunk with papery bark that has tons of character.  Ficus palmeri is often confused with another fig native to Mexico: Ficus petiolaris, which is endemic to the mainland Mexico. Baja California began to separate from mainland Mexico about 8.5 million years ago so it figures that these two species of Fig have been evolving separately since then. To confuse matters more, there is another Fig species in Baja California (F. brandegeei) which is similar to F. palmeri but has glabrous foliage. There is still considerable disagreement among experts as to whether these three species of figs represent valid species or subspecies. Either way, this plant is truly a rare gem that is not commonly available and is highly sought after for caudicifom collectors. We have a very limited number of these incredibly rare plants which we sell in one gallon containers while they last. 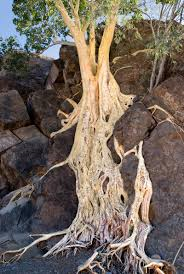